Over a mile of fishing stream runs through the property, along the North Fork of the South Platte River.(Courtesy of Bob Regester)

Amy Pfahler’s earliest memory of the Glen-Isle Resort is cleaning its cabins and shoveling snow.

“My parents had five kids,” said Pfahler, the middle child, of the turn-of-the-century resort her maternal grandparents purchased in 1924. “And it being a family business, we all had to work.”

But, she adds, the kids also grew up hiking and fishing on the family’s 123-acre property beside the South Platte River, 50 miles west of Denver. Every summer night brought a new amusement: square dance Tuesdays, picnic Thursdays; movies one week, bingo the next.

Now Pfahler and three siblings have put the post-and-beam style lodge and its 14 cottages on the market for$2.9 million.  The resort closed in 2012.

“My parents loved being in the mountains, they wanted to be their own bosses and they wanted to have a big family,” said Pfahler, 62. “I think (the next buyer will be) someone who looks at it and has a dream. It’s a beautiful property.”

The property’s listing agent, Bob Regester of Mossy Oak Properties Colorado Mountain Realty, said a buyer could build a new house on the banks of the South Platte or renovate the resort.

“We had a passion (to preserve Glen-Isle) because we’ve had a lot of family history here, too,” Regester said. 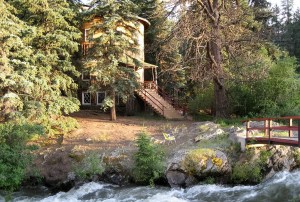 The hotel and 14 cabins are on 123 acres, surrounded by Pike National Forest. (Courtesy of Bob Regester)

Twenty-five men hustled to build Glen-Isle in the spring of 1901, completing it just in time to open in the middle of the tourism season, according to the resort’s 1984 bid to be listed in the National Register.

The resort was one in a wave of Adirondack-style hotels built in the Platte River Canyon in the late 19th century. Many were bankrolled by railroad barons hoping to increase traffic on the nearby tracks.

The centerpiece of the lodge lobby is a tree trunk, with logs branching out from it to prop up the ceiling. A curving staircase to the top story leads visitors to 14 guest rooms – four in a cylindrical tower and 10 along a corridor.

In its early days, one Denver newspaper called Glen-Isle a place for “people of refinement,” where “one can rough it as much as he chooses” or be “as exclusive and elegant as taste demands.”

Guests could spend the day on the covered veranda that still wraps three sides of the main story, or take a chair beside one of the lodge’s four stone fireplaces if the weather turned.

But the rise of the automobile and the decline of rail travel stunted tourism in the valley. Some nearby resorts burned, others closed or were converted into dude ranches.

In 1924, Pfahler’s great-grandparents purchased the resort. Their granddaughter Barbara would later meet a forest ranger named Gordon Tripp while spending the summer there. The two married and then took over the resort in 1946.

Every day between June 1 and Labor Day, Pfahler recalls her mom serving three meals in the main lodge dining room and employing a dozen college students. Many employees, families and little old ladies arriving via Greyhound bus returned each year.

“For us, it was almost like a family reunion, even though we weren’t related,” Pfahler said.

The seasonal work meant money sometimes got tight by spring, Pfahler said, so Barbara eventually opened some of the cabins in the winter.

Gordon passed away in 1999, but Barbara continued to manage the resort until her death at age 89 in 2012. Pfahler said she and her siblings have decided it’s time to share Glen-Isle with its next steward.

“We just wanted someone else to love it and hoped that they would rent it the same way our mom did,” she said. “It’s got a lot of potential.” 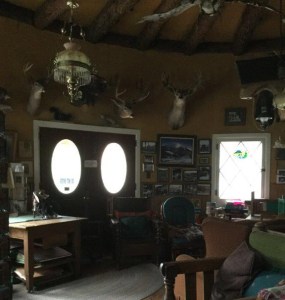