Company Vice President Steve Eaton said he liked the building for its location near the light rail, retail and hotel amenities and the aesthetics of the office complex’s nearly 9-acre campus.

“It has a beautiful travertine exterior skin imported from Italy when the building was developed in 1984, and it’s an institutional quality, trophy asset with phenomenal grounds,” Eaton said. 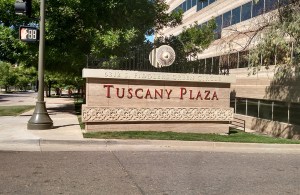 The complex’s east building has one full floor available, and there is one other 2,000-square-foot vacancy.

Crescent was familiar with Tuscany Plaza before swooping in to purchase it earlier this month. Company CEO Conrad Suszynski said his firm was a tenant in the building six years ago. The firm also previously owned the Peakview Tower office building a block away at 6465 Greenwood Plaza Blvd.

Suszynski said Crescent is planning about $5 million in upgrades at Tuscany Plaza, focusing on the property’s main lobby.

“We are going to make a significant investment,” he said. “What we’re looking at is creating a sense of arrival and community in the lobby area and the existing atrium.”

The seller in last week’s deal was California-based Cornerstone Real Estate Advisers. They bought the property in 2011 for $47.09 million, according to Arapahoe County real estate records. Winn and Richey sold the building that time as well.