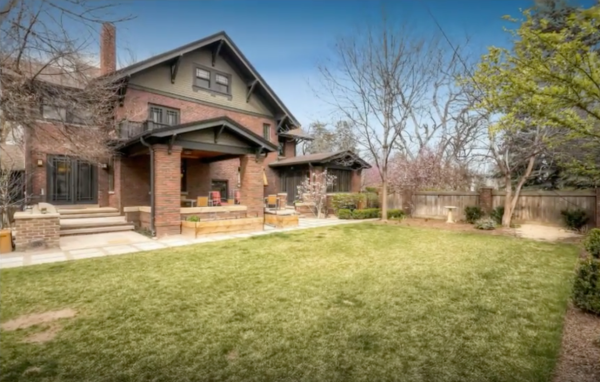 The backyard of the home at 1909 Forest Parkway.

The co-founder of PorchLight Real Estate Group had a hot property for sale last month: her own.

She kept half the deal in-house. PorchLight broker Taylor Lawton listed the seven-bedroom home at 1909 Forest Parkway, which was built in 1919 and renovated by the owners prior to Bayer. He said his favorite spot is the back porch.

“They have a nice covered patio overlooking the yard,” he said. “Today it’s a lot more common to have that, but those older homes, they’re not so inside-outside living friendly.”

The house sold for $335 per square foot. The Kentwood Company represented the buyer.

Besides the patio, the backyard sports a log cabin-style playhouse with a climbing wall and tire swing.

Lawton said the house, which sits on a third of an acre at the southwest corner of E. 19th Avenue and Forest Parkway.

Carol Freyer Bayer and Amy Bayer founded PorchLight in 2005 and serve as co-CEOs of the company. PorchLight currently lists 148 broker associates on its website.

According to Denver property records, Carol Freyer Bayer purchased the house four years ago for $2.3 million.

The buyer is Stephen P. Gottesfeld, an executive vice president and general counsel of Newmont Mining Corporation. Gottesfeld was an associate at Holland & Hart before joining Newmont in 1997.

July marks the first time this year that the price tag on the highest-priced home to close in a given month has dipped below $3 million. A newly-built house in Highlands Ranch sold for $6.7 million in May, making it the most-expensive real estate to close in 2016 so far.