Jeff and Gail Elberson spent two and a half years renovating their dream home, a 1908 Denver Square near Cheeseman Park.

Now the retirees are selling it for more than five times what they paid in 2011.

The couple hired builders to gut the house – moving the original staircase, extending the house from the basement to an upstairs balcony and replacing the front porch. They found carpenters to carve corbels and columns by hand, and hired designers to recreate wallpaper and glasswork from old pictures.

The last work crews left in the spring of 2014.

“Then we fell in love with our farmhouse in Vermont,” said Jeff. Plus, Vermont is closer to the couple’s two sons.

Earlier this month, Jeff and Gail put their home at 675 N Humboldt St. on the market for $3.6 million. Debra Fagan and Wendy Handler of LIV Sotheby’s International Realty are listing the four-bedroom, eight-bathroom house.

Fagan helped the Elbersons buy the house after looking around Denver for years for a home close to the right park and with the right bones.

“(Jeff and Gail) picked out every single detail, every hinge,” said Fagan. “They wanted to do a house that was a really authentic Craftsman, but with every update you can have.”

Craftsman-style architecture, so-named because it incorporated handcrafted woodwork and other art, became popular in Denver in the 1890s through the 1920s.

But by the time Jeff and Gail purchased their house in the East Seventh Avenue Historic District, much of 675 Humboldt’s original trim and woodwork had been stripped out. Working with Iris Building Group and the Denver Landmark Commission, the Elbersons resolved to redo the floor plan. 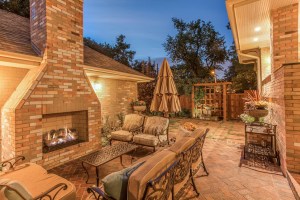 The four-bedroom, eight-bathroom house was originally built in 1908. (Courtesy Sotheby’s)

Visitors entering the 6,400-square-foot house today see a wood-paneled library on their left and a dining room on the right. Hallways lead to a kitchen with a marble center island, a dining table and a family room, with a door to an outdoor kitchen on the back porch.

On the second floor, the couple redesigned each bedroom to include its own private bathroom. The top floor holds an office, bathroom and a balcony. The basement includes a gym, steam shower and sauna.

Along the way, the couple fitted beams for the ceilings and oak floors with mahogany inserts.

Other times, the couple repurposed original parts of the property. They used the floor from the original porch to make a built-in desk for an office on the top floor and a laundry room in the basement. Rock mined from their front stoop is now the floor of the adjoining wine cellar.

Now both retired, Jeff worked for Time Warner Cable and Fanch Communications while Gail did commercial underwriting in the insurance industry and worked as a teacher.

Jeff said the goal of it all – old porch floors used to make new surfaces, new hardware designed in an older aesthetic – was to make a timeless house.