A rendering of the planned $90 million project, which includes more than 300 apartments on 11 stories.

A busy Denver developer is picking up a LoDo apartment tower project that stalled and eventually fell apart around the time of the recession.

Trammell Crow Residential is proposing a new 11-story apartment building covering a half block along Market Street, between 18th and 19th streets. TCR development director Matthew Schildt said it’s a $90 million project that makes at least eight new buildings the company is working on in Denver.

The building will take shape on a half-block site currently owned by New York-based BlackRock. BlackRock previously held a loan backed by the real estate and took the land back from Denver-based Corum Real Estate about seven years ago.

Corum assembled the real estate with a couple of acquisitions in 2005, city records show. It had planned a multifamily tower for the property, according to a 2009 story from the Denver Business Journal.

The newest iteration of plans, presented to the Lower Downtown Design Review Board yesterday in 45-page presentation bearing both the BlackRock and Trammell Crow Residential names, calls for 305 apartments with micro-units, studios, and one- and two-bedroom units.

Johnson Nathan Strohe is the architect listed for the building, which would jump between six stories and eight stories along Market Street before stepping up to 11 stories near the middle of the block.

Of 300-plus apartments, four will be walk-up units at street level in the middle of the block. The apartments will be flanked by amenity space and the apartment’s lobby on the 18th Street side, and about 9,500 square feet of retail space on the 19th Street corner.

The plans also call for 371 parking spots between 1.5 stories of underground parking, and another parking deck on the building’s second above-ground floor. Plans also show a pool deck about halfway up the building facing Market Street and a second rooftop deck atop the 11th story.

The design may need to be modified, however.

The Lower Downtown Design Review Board denied the building’s application after a review of its proposed mass and scale Thursday morning. The board deemed that the above-ground parking deck, along with a handful of other items, did not meet the design guidelines for Lower Downtown.

Until the Market Street building gets out of the ground, however, Trammell Crow will be plenty busy with other work around town. The apartment developer is currently working on major apartment buildings in Sloan’s Lake, Cherry Creek, Uptown, the Highlands, LoHi, Five Points and at the corner of 20th and California streets.

The company just closed on its Five Points site, about half a city block away at 22nd and Welton streets, earlier this week. Trammell Crow Residential paid $7.5 million for that property, city records show. 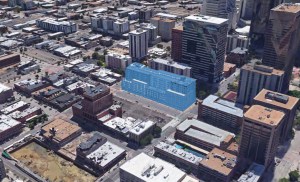 A rendering of the proposed development, highlighted in blue. New York-based BlackRock currently owns the half-block site on 18th Street.